Music of the SHAMISEN 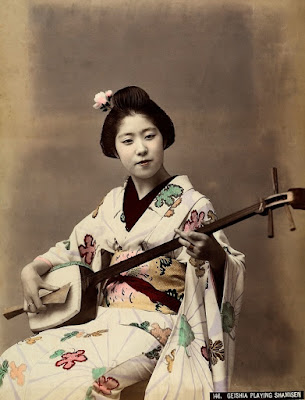 The shamisen (三味線) is a 3-string, long-neck banjo-like instrument which was originally developed from the sanshin (or sanxian), an Okinawan Ryukyu Kingdom instrument.  Like the biwa, it has a unique percussive attack and an unmistakable "twangy" texture, called sawari in Japanese.  However, instead of bending strings (as in biwa) for articulation, rapid finger-slides are much more common.  Shamisen music (especially in tsugaru shamisen) is also often able to impart a distinct percussion part because the plectrum can be used to strike the shamisen body in rhythmic accents.  Three basic tunings are used: Hon-choshi (solemn music), Niagari (happy/gay music) and Sansagari (melancholy music) on three types of shamisen: Hosozao (thin neck), Chuzao (middle neck) and Futozao (broad neck).
Shamisen music is used in two main settings: as theater music (such as Gidayu Joruri for Bunraku puppet theater, and Nagauta for Kabuki theater), and recital music with vocals (such as Jiuta, Kouta, Nagauta, Hauta, etc). These two settings can also be further categorized based on whether the work focuses on lyric song melody (Utaimono, '歌いもの) or story narration (Katarimono, 語り物). 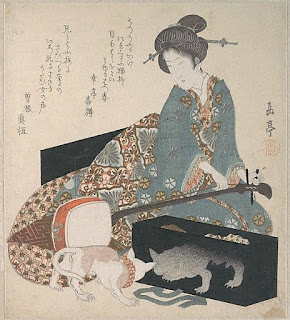 Kouta
The use of shamisen to accompany vocal folk songs led to the development of the simplest Utaimono (lyric) form, Kouta (小唄, wistful “short” songs).  Sets of poetic Kouta folk songs were combined to create suites called Kumiuta (組歌, which are also found in koto music).  Different Kouta styles were developed and made popular, most notably in the geisha world of the Edo period.  In Kouta technique, the shamisen has a softer tone (fingers are used instead of picks), and the shamisen melody often leads or lags behind the vocal line.


Kouta offshoot styles include:
Jiuta
A more developed utaimono form is the jiuta (地唄, “earth/fundamental song”), a lyric form also found in koto music.  A Hosozao or Futozao shamisen (thick neck/strings) is used in this form to accompany deep, expressive singing (sometimes with added koto accompaniment).  Often, abrupt swooping melodies are used to express suppressed emotion (atari).  As in kouta, the vocal and shamisen melodies follow, but "dance around each other", so to speak.
Structurally, instrumental interludes (often thematically unrelated to one another) divide up songs and poems, somewhat combining elements from both kumiuta and shirabemono (solo instrumentals).  The structure of a jiuta can sometimes be split up into the Maeuta (fore song), Tegoto (interlude), and the Atouta (after song).  "Onoe no matsu" is a well-known jiuta where songs and interludes alternate in "tegoto-mono" form, and whose added koto part was developed by the famous modern composer Michio Miyagi.
The Sakumono (作もの) is a lighter, more playful sub-genre of jiuta, in which shamisen may sometimes imitate animals.  The jiuta below however, accompanies a Geisha dance performance:

Nagauta
The most complex and  important utaimono lyric form, however, is Nagauta (長唄, or Edo-nagauta).  This “long song" style was developed in Edo (Tokyo), and was intended to accompany dance sequences in Kabuki theatre.  However, it also later became an independent genre as banquet recital music (Ozashiki-nagauta, or "seated" Nagauta).  The Nagauta ensemble eventually expanded to also include additional shamisen and Noh hayashi instruments (flute & percussion, singers).  Utilizing the Hosozao shamisen (thin neck, thin string, bright tone), this form takes elements from both Osaka jiuta song repertoire and the narrative Joruri form (see below).  Nagauta structure is usually in 6 basic sections:
In Nagauta, the voice and shamisen take the lead melodic role (sometimes with flute), with the o-tsuzumi and ko-tsuzumi drums playing a supportive rhythm.  The flute, on the other hand, plays a counter-melody which is supported by the taiko drum.  In some sense, the flute and taiko layer provides a layer of dynamic tension which could be comparable to harmonic chord movement in Western music.  Melodically, Nagauta uses a vocabulary of patterns and phrases to impart specific emotional settings.  Nowadays, Nagauta is also performed outside Kabuki performances with added elements from jiuta, Kyogen comic songs, and other short forms.  In the performance below, the music begins at around 1:45:

Katarimono: Narrative Styles
Narrative styles of shamisen music are referred to as Katarimono.  For example, Katarimono focuses on the story, whereas Utaimono focuses more on the melody.  In this narrative form, a tayu (chanter) narrates a story (sometimes including exaggerated puppet dialogue), accompanied by shamisen.  There are numerous Katarimono schools and these schools are distinguished by their performance style or specialized subject matter.  Historically they have also competed for attention in the marketplace.


Instrumental Shamisen: Tsugaru-Jamisen/Shamisen
One of the most popular instrumental shamisen styles is Tsugaru-shamisen (津軽三味線), which falls under the category of folk music (more or less).  This style of folk shamisen music originated from the Tsugaru peninsula (Aomori prefecture) and is played on a Futozao (broad neck) shamisen.  It features percussive strikes in it's articulation to impart a layer of rhythmic activity (a "groove", of sorts).  Tsugaru-shamisen frequently employs virtuosic technique and improvisation as signature parts of its style and is highly popular with contemporary audiences.  Some pieces are also arranged for vocal chamber ensembles.  Takahashi Chikuzan is an important Tsugaru Shamisen player historically, but nowadays the rock-influenced Yoshida Brothers (below) are probably the most famous Tsugaru-Shamisen duo today.