This site presents an informal history and outline of traditional music from Japan (also known as "Hōgaku" (邦楽), and gives an overview of the various genres and sub-genres of Hōgaku music.  Below are some broad generalities about the compositional style of Hōgaku, followed by a timeline chart.

Japanese traditional music is structurally different from European classical music in that heterophony (multiple voices loosely following a single melody line) is much more prevalent than homophony (a melodic line supported by a rhythmic chord progression).  Oftentimes in songs, the vocal and shamisen parts may seem to lag behind one another or "dance around" each other.  Sometimes the rhythmic offset of instrument and vocal lines can result in a layered "canon-like" texture.  This variance in melodic line is generally greater in Japanese music than in other heterophonic music genres (Chinese music, for example)
.
Additionally, each instrument has their own set of stylistic ornaments/articulations which are used to create a sense of orchestral depth (such as in Gagaku or Sankokyu).  Other times, instruments and vocals may engage in a kind of call and response dialogue (for example in biwa music).  Koto music, however, tends to have a greater sense of harmony, due to the sustained nature of their string sound.  Because the koto is tuned to open chords, this adds to the harmonic effect.

Historically, music in Japan has grown around ritual ceremonies (Gagaku, Kagura), story recitals (Heike-biwa), practical work settings (Dengaku, folk songs) and theatrical productions (Noh, Kabuki).  In the more recent Edo period, the "pleasure districts" (as portrayed in the  ukiyo-e ("floating world") woodcuts of the period) created a market for more private song recital genres such as those accompanied by shamisen and geisha.  In the meantime, playing the koto at home was an activity which indicated a civilized upbringing (much like how learning how to play the piano is in the modern world).  Other instruments were historically popularized by their use as portable accompaniment for wandering priests or ronin spies (shakuhachi, biwa).

Below is a brief rundown of the major periods in Japanese history and the musical developments associated with them (extrapolated from the pull-out chart in William Malm's excellent book on Japanese music).  At right are links which may be followed in order (they are listed roughly chronologically) or by genre/instrument.

The primary sources for the information presented here is William P. Malm's "Japanese Music and Musical Instruments" (Tuttle, 1959), Wikipedia, and Britannica, as well as various CD booklet notes in my collection (most notably the King Records' 2003 10 CD set). 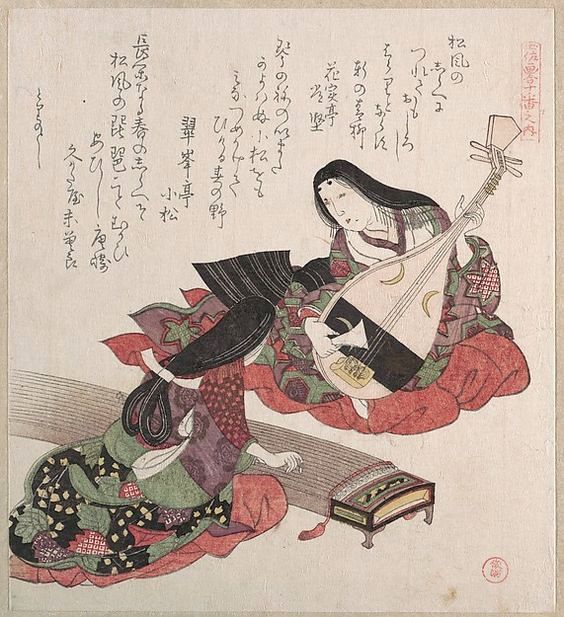